Pig in the Grass (A Story about Prayer) 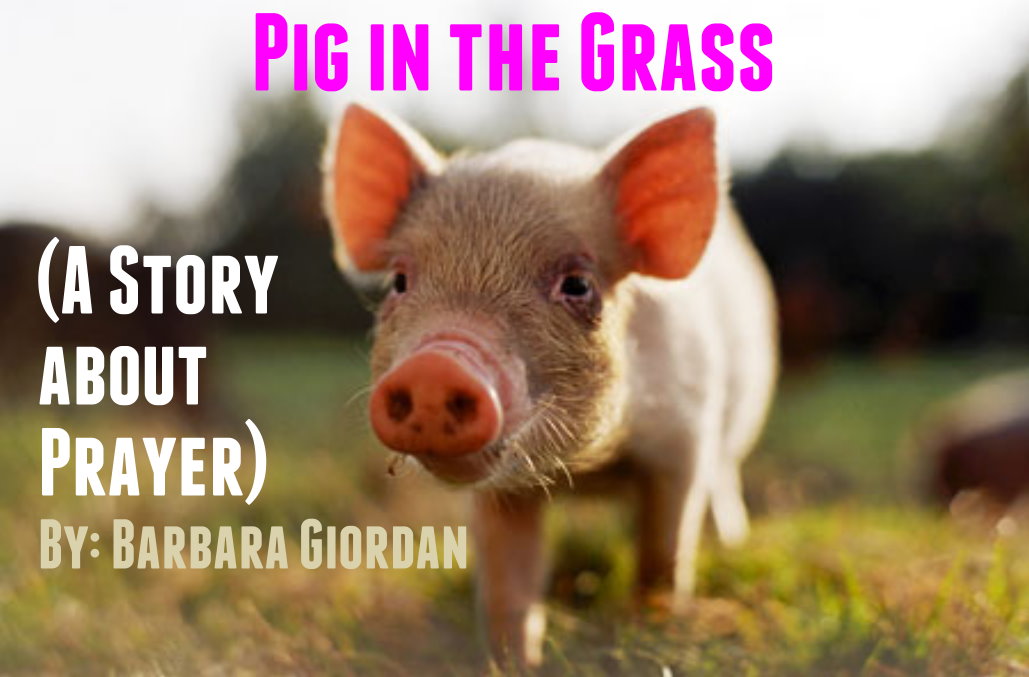 “And this is the confidence that we have in him, that if we ask according to his will, he hears us.” 1 John 5:14

When my son, Josh was about a year and a half old, I was sitting in our living room when I happened to glance out the window and noticed a pot-bellied pig grazing in our front yard. It wasn’t the kind of thing you expect to see but it wasn’t totally uncharacteristic for the neighborhood. We lived on a private trail with a few neighbors scattered here and there. Adjacent to our property was an abandoned ramshackle ruin overrun with feral cats and garbage.

I had heard the rumor that a neighbor of mine owned a pot-bellied pig. Still, I was startled when I saw this pig in my yard casually munching on some grass. I placed Josh in his crib, donned a robe, and hastily ran outside. The pig looked a lot bigger close up. Feeling a bit nervous, I tried to coax the pig into my garage while I figured out what to do. He didn’t budge an inch. After several failed attempts, I ran inside to call for help. I really didn’t know how who to call. Mostly out of desperation, I contacted the local dog warden. I succinctly and calmly explained the situation to the warden. He was a bit flustered and made me repeat the story several times. Finally, he put me on speaker after my third attempt and sounding very exasperated practically screamed, “Lady, we are dog catchers. We don’t catch pigs!” I heard raucous masculine laughter in the background, and I quickly hung up.

Determined to bring this trial to a close quickly, I threw on some clothes, buckled my son into his car seat, and drove to the house where the pig was rumored to live so I could notify the owner. I discovered that somehow this huge pig had waddled home and beaten me to the driveway so I left without giving it another thought.

Six months later when Josh was two, I thought it was a good time to teach him how to pray. I explained that at mealtime, we gave thanks to God for the food and perhaps mentioned something we were afraid of. I asked him if he wanted to try and he nodded his head yes. He began to pray in a little whispery voice that was barely discernible, “Dear God, thank you for the food, and protect us from the pig. Amen.” I couldn’t believe my ears. I asked him, “Josh did you say protect me from the pig?” He nodded.  “Are you talking about that pot bellied pig that visited us six months ago?”  Again, he nodded. It turns out that he had been so afraid of that pig that for a third of his life, his little mind had stewed upon this new fixation.

It became a nightly ritual to pray about the pig for many years to come. The word “pig” took on a myriad of meaning as it began to represent every possible danger that existed in a young boy’s mind.

The prayer functioned like a talisman: warding off evil. The ritualistic aspect of it provided a certain comfort because of its familiarity. It was like greeting an old friend as his mouth rolled around the same consonants and vowel every night. The word “pig” had lost its original meaning and sometimes it felt like he had forgotten whom he was praying to altogether, and therein lays the rub. Imagine if a beloved friend had the exact same conversation with us every day… year after year.

As Josh matured, he stopped praying about the pig. Perhaps it was because his fears had diminished, or maybe they were more elaborate and harder to articulate. I would like to think it was because he and God had a lot more to talk about.

I am always reminded by this experience that even though that pig was long gone, the Lord was glad to hear about Josh’s cares.

← Biblical Repentance The 15 Attributes of Love →